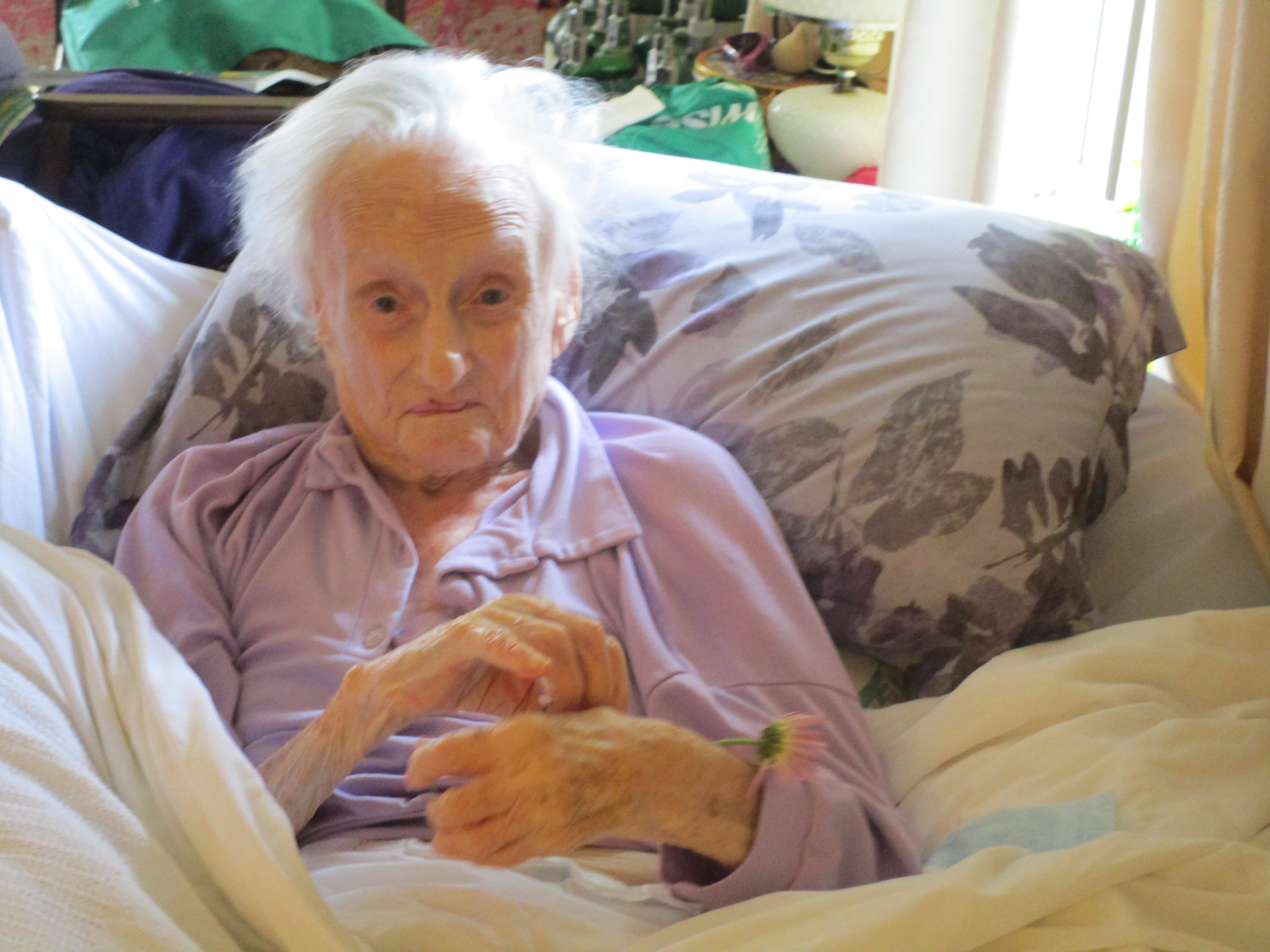 Frail…   motionless save for the slight breathing astonishingly unlabored… but so slight there’s more death than mom in the frailness on the bed, that body who used to be her. She barely eats any more the aides tell me. She’s in hospice care. She seems on the verge of recognition, but still weak, resigned. I speak loudly into her good ear, gently jostle her shoulder. But she cannot muster anything more than withdrawal. Her wrinkled eyelids  will not open. On the wall is the crucifix that is used for last rites or anointing of the sick. Inside its hollow body is a vial of holy oil and small candles, when opened the T-bar of the cross doubles as holders for the candles. Mom showed me this cross, opening it up and explaining its use, one of my earliest memories. She wanted me to be a priest and for a while as a child I thought I would. The cross hung on the wall of the bedroom at our house from when before I was born. I guess I was conceived beneath this cross. She remains unresponsive to anything I say or do.  Her eyes open once or twice, but just to blink, nothing more than just the verge, staying safely outside any boundary of consciousness.  She’s been mostly like this for two or three months now, except for periods of lucidity, increasingly brief and always less and less lucid. Shut down but not dead you might say. I’m not sure what to do, I sit there, talk at her, feel sort of silly. My sister and I trade texts. There’s nothing you can do, she advises, just be. I watch television which was on when I arrived, soon after the hospice nurse left. Sunday morning political chat shows regurgitating everything I already know about whatever Trump’s outrage from the week before was. I hate watching television, I shut the damn set off and maybe its the crucifix and the memory it sparks… I am a prayerful, mass attending guy and say rosaries often but never here at the assisted living center, or ever with mom – we’ve gone to mass together of course, but aside from grace before holiday meals, no praying together –  the rosary occurs to me as just something to do. So I pray a rosary, a very nice, relaxing rosary… my nerves get soothed… and at the moment of completion, when I am blessing myself and kissing the holy queen medal, my mother’s eyes open and she mouths how are you. She’s too weak too vocalize in any truly audible fashion, she speaks in less than a whisper, just lips and breath. I am fine I say back, how are you. She shrugs, slowly, all right she mouths and I say do you know who I am and crossing the verge, she mouths, Timothy. I show her the flowers, I brought you flowers, and she says, they’re beautiful. A muted squeak, from deep in her lungs. The bits of light left inside her eyes glistening. She’s more alert than she has been in weeks… she no longer wears the red wig, her hair now an eerie white, like fine threads of ivory, combed way back, making her forehead seem preternaturally swollen. Her skin is pallid and splotchy, balloon tight on her head, with deep furrows… I love you I say loudly into her good ear and she mouths I love you back… she recognized me, she was lucid for nearly ten minutes, more than seven for sure. I make no claim this was some rosary miracle, although she had been having trouble knowing who I was as her dementia deepened. But this moment she was certain I was her son.  I am teary with joy but, her recognition being so completely unexpected, a little flabbergasted. Gradually she loses interest in me, and stares at her fingers, something she’s been prone to do for these last few months of her life. I put a flower in those fingers and kiss her on the forehead.  Her eyes and general countenance was child-like. That’s what I can still not get over, this innocence reborn, an innocence that existed in her before I knew her, the only time I’ve seen eyes look this way are in the faces of toddlers and infants…  now this same way of seeing is shining through the face I’ve known my entire life and will remember forever….  brighter than the debilitations of advanced age and sickness, oblivious to the deathbed, making this final farewell… letting me know her eyes knew me.