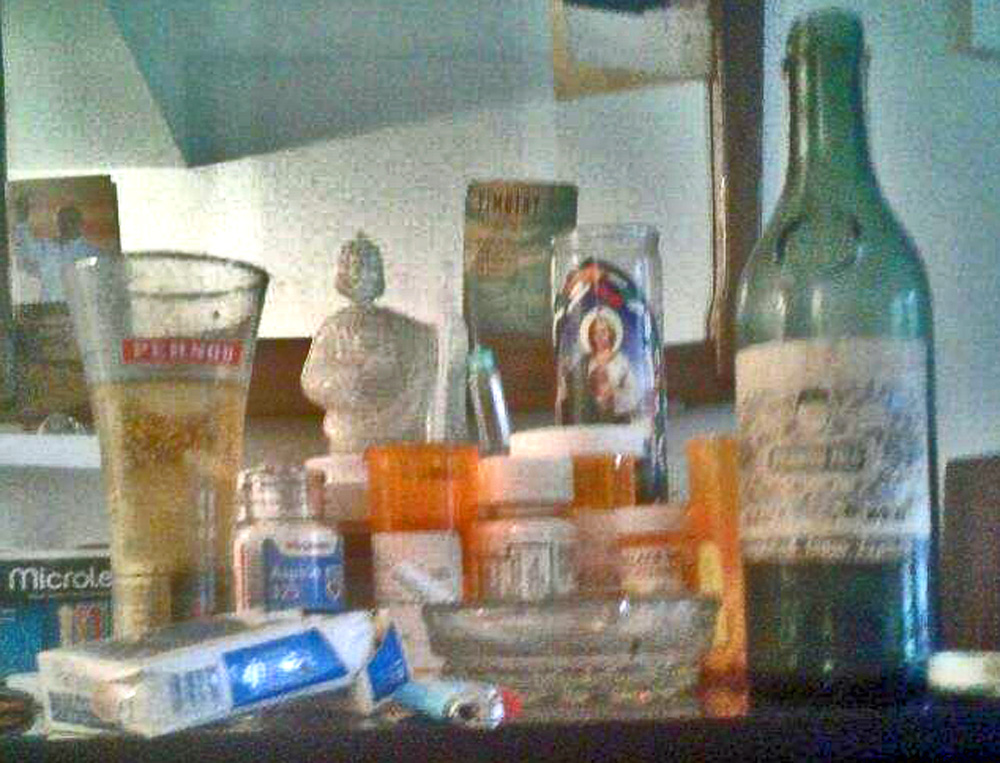 I quit drinking because of diabetes, I don’t miss it, maybe not never but never as much as I miss cigarettes… second perhaps drinking may be, but not a close one when I consider tobacco… smoking’s the best… I miss drinking less than I miss smoking when drinking.

Drinking when not smoking limited my enjoyment of drinking; smoking and drinking is drinking at its best, and certainly some of the most pleasurable, delicious and fulfilling cigarettes you can ever have are alongside your adult beverage of choice.

First bars banned smoking and you had to legally separate the cigarette from its beloved alcohol companion, forced to enjoy the comforts of drinking and smoking in seclusion. Now and forever only together at home or in the home of a fellow smoker.  Then the heart attack forced me to live the life of a nonsmoking smoker.

I can never inhale again, but I’m with you all the way, from every balcony or patio to every stoop or sidewalk  or doorway to the solitude of the night shadows, when each inhale makes it impossible in that moment of splendor to dwell on the un-ringing phone or the work that has to be done or that thing you have to… do… do I want to smoke, do I even sense a craving I’m able to suppress?

Not in the least. I know I’m a smoker, I am aware of my personality and in awe of tobacco’s power over me. I spent weeks, months, removing cigarette craving from my menu of appetites.  I stopped the addiction by not smoking, through honesty about the pleasure of the cigarette, the aesthetic intimacy and romantic reflective pause tobacco can induce. I may no longer participate in the sacrament we smokers hold dear but I am unable and unwilling to leave our holy temple.

I miss smoking, I think about smoking constantly, but the temptation to smoke… not the slightest tremor…  it seems that its constant presence in my mind has made actual yearning inconsequential… but comparing missing drinking to missing smoking is like comparing the universe to the smallest asteroid in a solar system,  the difference in scale makes any contrast foolish.

I miss smoking so much more than drinking that every time I had a non-cigarette or post-cigarette drink, from sip to second round please – whether for reasons  legal or health or otherwise – when I drank unable to smoke… almost all pleasure disappeared…  when an artic chilled lager or the ideal blend of bourbon and melting ice flowed through my lips and joyfully welcomed by tongue and throat and began my earthly spirit’s inevitable if temporary ascension, that ascendance could only go so high, any joy now irrevocably limited by the absence of tobacco’s catalytic pleasure.

Drinking without smoking  made drinking far less enjoyable, made drinking impossible to be anything other than a gesture of memoriam, little more than an act of grief for the eternal loss of smoking. Post quitting smoking, drinking made me miss smoking more than not drinking – now drinking’s only pleasure was the grief of loss, of remembering smoking, because despite the emotional devastation of any grief,  grief over not smoking at least includes the memory of cigarettes and in some even small way panders to the cigarette love we smokers know.

Any loss leaves a lingering presence and since I know I will never smoke tobacco again, the grief over abandoning the greatest vice the human condition knows is perpetual. The loss is always there, whether I admit to it or not.  Dwelling on the loss keeps cigarettes in my life!

I may expound about my favorite brands of booze, help build the fanfare around good friends sharing drinks, but my mind doesn’t dwell on drinking like it does with smoking. I never dream about drinking. I dream about smoking frequently to this day – I even dream about dreaming about Parliaments – I can wake after a dream where cigarettes abounded and  just think about smoking until I get out of bed or fall asleep again.  Happen nearly every night during my first few non-cigarette weeks but it happens to this day, last week in fact.

With the drinking…  I drank less frequently but still normally after the heart attack, then again I was rarely anything other than a gentlemen drinker… after college at least – I had wild times, inebriated days, drunken vacations… but benders lasted less than a week, never any blackouts, never any problem not drinking, going dry… I would always take breaks…  go weeks even months simply not drinking or limit it to Friday night drinks…. I never drank at concerts or most other events, I don’t like drinking with large groups of strangers… even when I would drink a beer at home after work, there was always a night or two of no drink at all, balancing out those nights when the beer led to whiskey… but there came a time that the taste of the booze suddenly was metallic.

The flavor change was gradual but persistent, a weird forgettable aftertaste at first until it was simply as vile a taste as anything that tasted awful but not bad enough to provoke involuntary gagging. Even though I could only get down a single drink, I still had this weird hangover, a head ache while not incapacitating, was relentless and invulnerable to Aspirin, Tylenol and  Advil – I’m a stomach person – people are either headache people or stomachache people, me it’s the gut and gut related symptoms when  I am feeling ill, other than a cold and if gut stuff accompanies the cold, I’m really sick… headaches are rare so when they occur I pay particular attention. I literally could not drink any less than I did. Half a shot of whiskey in a tall glass of icy seltzer, as much for flavor as for spike… irritating flavor, then a bad headache next day…  boom… hungover from a barely perceptible dollop of booze…. but also, the taste, where the flavor of whiskey  always makes the top 10 ten things making life worth living list, it was now bitter, tasted of tin,  a suspicious medicine whose healing powers are suspect.

I mentioned this sudden flavor change to my primary care and my endocrinologist and both had the the same wave of a hand, cite the same dismissive opinion: you’re better off without the alcohol, don’t think about it. No significance to be read into the taste bud transition… it’s probably related to diabetes, just because some people can drink with diabetes, doesn’t mean you should…  do I miss it, the drinking, the power of whiskey, the wisdom it can convey and the empowering task of separating the malarkey from the newly discovered truth and deciphering that truth to un-conceal its wisdom… in conception, yes, not being able to mark a birthday or an occasion of friends gathering without the consecration of a toast – but in execution, whiskey as wonderful as it was as both companion and consultant,  it possesses little if any wisdom left to bestow. Familiarity with the source depletes most of its wisdom over time.

I admit to getting bored quicker at receptions and the such where the social glass is expected to fuel cordiality and fellowship, but I rarely drank at those occasions anyway  so my accelerated sensitivity to their innate tedium may come from elsewhere – I consider them work – but sometimes there’s other gatherings, with good friends sure but also in quasi-work  or networking situations,  much less formal, usually at the corner bar.. . I no longer drink and sort of wish I could… not drinking in those situations makes those situations less fun because as the only sober person in the group you’re always the spectator, never the participant… but being a spectator fills me with far less sorrow than pining for the cigarette alcohol mournfully remembers.